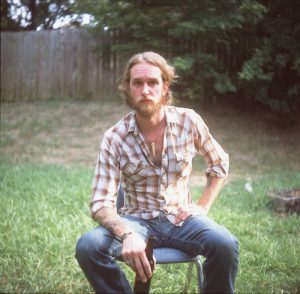 On October 19, 2016, Chris Porter and bandmate Mitchell Vandenberg died in a van crash while making their way to a show. A cult favorite among his fellow Americana musicians, he was known for his eclectic projects: The Back Row Baptists, Some Dark Holler, Porter & the Pollies, and Porter & the Bluebonnet Rattlesnakes.

I’m not an Americana scenester and before receiving the press release and preview for the new posthumous LP had never heard of Porter. But that really doesn’t matter because the LP itself (Don’t Go Baby It’s Gonna Get Weird Without You) serves as its own introduction to the man’s unique sensibility. Like you can hear in the best material of artists as different as Bob Dylan and the Meat Puppets, Porter walks the thin line between psychedelic esotercism and straight-shooting literalism, all imbued with a deep affection for the derelict, the rejected, and the quotidian side of America–both in its surfaces and its spiritual depths.  “Shit Got Dark” may be of special interest to Birmingham listeners, as the Magic City is  namechecked both in tribute and weary, existential futility.

Ultimately, the main attraction of the LP is how forcefully Porter was able to put across his vibrantly contradictory interests in seemingly familiar Americana forms. Whether the subtle inclusion of an oddball sonic element like a synth, or a surprising turn of phrase, novelty is never just novelty: it always speaks to a special kind of perception haunted by both affection and heartache.

Don’t Go Baby It’s Gonna Get Weird Without You released on October 20 through Cornelius Chapel Records.