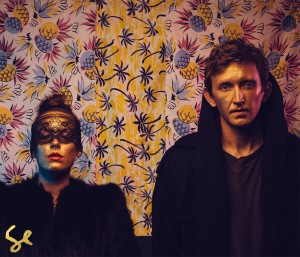 This was the feel of the Sylvan Esso show at WorkPlay, where Birmingham welcomed a band who mixes strong jazzy vocals with creative electronic beats that swing your hips and whip your hair. With each of the ten songs of their premier album, Coffee, the band delivers talent and addictive innovation to an increasingly EDM-saturated music culture. Matching entertainment with impressive music, the band covered the stage with personality as she danced and he mixed. And with each starting beat, different voices catcalled their excitement, as if every song the band played was the favorite of the album.

Both originally from Durham, North Carolina, Amelia Meath gave Nick Sanborn one of her folk band’s songs and realized the electropop mix would be a game changer. When the Appalachian Indie folk band’s tune met the electronic producer of Megafaun, “Play it Right” began the year long recording collaboration between the two artists. Coffee was released May 12, 2014, and in a year the band has reached 61.3k Spotify followers, a #7 top listing on the Independent albums chart, and a #39 listing on the Billboard 200.

Their live performance showed just how captivating a combination of A-cappella with intermittent body-rolling bass beats can be, and as the duo sings on themes of celebration, insecurity, caution and rapture, the soul of the sounds surpasses simple party music threefold. The two engaged the crowd as if sharing their excitement, and Meath’s high-energy personality filled the WorkPlay Soundstage. She asked the audience to howl before starting their song “Wolf,” and communicated wordlessly with Sanborn as they felt their way through a set that rose to an all-time climax about four times.

The band brought talented electronic mixologist and singer Jenn Wasner with them from Flock of Dimes, who had the crowd cheering with just a soundboard, a mic and a guitar. The Wye Oak vocalist started the audience bouncing, and by Sylvan Esso’s last song- the tune “Play it Right” that began it all- the crowd hardly had dancing breath left to cheer them to an encore.

But encore they did.

Flock of Dimes and Sylvan Esso helped introduce a series of bands finally bringing EDM to Birmingham, with Tycho playing Iron City on Easter, Betty Who playing the new music venue Saturn this summer, and Robert DeLong (among others) playing Sloss Fest in July.

As quality music visits Birmingham’s intimate venues with Alabama ticket prices, keep an eye out for the indie and EDM bands heading to hit it big. And give a listen to Sylvan Esso’s song “Hey Mami” before doing anything else with the day- you’ll have a new song addiction on repeat, and a new dancing family with that “Coffee” buzz.